On April 12, 2015, Entrepreneur and Benefactor M.Sc. Krikor K. Jabourian presented the Erebouni pen to Pope Francis in St. Peter’s Basilica in Vatican, accompanied by a copy of the Rebirth Towards Eternity memorial book. The gift was presented on the day the pontiff celebrated a divine liturgy on the occasion of the Armenian Genocide Centennial and proclaimed Saint Gregor of Narek Doctor of the Universal Church.
Two days later, on April 14, as previously agreed upon, entrepreneurs Krikor K. Jabourian and Dikran A. Tchablakian met with the world-famous artist and ambassador of Armenia to Switzerland Charles Aznavour and presented the same pen and edition to him. The latter highly estimated the initiative, which, a unique homage to Armenian artists, serves the purpose of introducing and propagating the Armenian culture worldwide.
The gold-carved Erebouni pen, designed by painter Koko Garabet Sakayan, is a product of the renowned Montegrappa Company. 3 types of the pen – Hokevor (Spiritual), Haverj (Eternal) and Kragan (Literary), were presented at the Basel 2015 International Exhibition (Switzerland) on March 18-20, 2015, gaining much interest.
The initiators of the project, Krikor K. Jabourian and Dikran A. Tchablakian, Armenian businessmen residing in Dubai, UAE, sponsored the publication of the Rebirth Towards Eternity octolingual memorial book, encompassing the biographies of 61 outstanding Armenians who have played a major and decisive role in Armenia’s politics, culture and religious life throughout centuries. The book is authored by Rev. Fr. Mesrop Topalian.
Decorated with Armenian national and religious motifs and carrying the most typical symbols of Armenian religious and secular culture and history, the Erebouni pen is a unique tribute to the Centennial of the Armenian Genocide and an oath of commitment to stay true to the legacy of the 1.5 million martyrs and continue to nurture the Armenian culture.
The Rebirth Towards Eternity memorial book, in its turn, is a brief but clear testimony of the values that the Armenians created during millennia and for the protection and preservation of which they voluntarily bore the harshest ordeals ever seen by humanity. 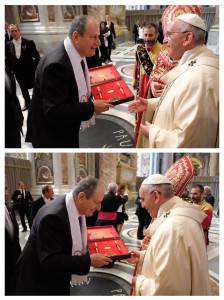 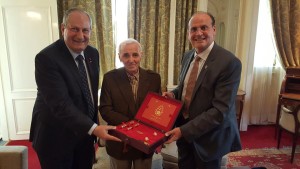