The project Erebouni is a labour of love, borne out of our reverence for our nation Armenia; it is not just a commemoration but also a look to the future in hope and joy for the growth and progress of our nation.

The project brought together diverse talents in its execution, including theological exploration, business acumen, illustration and design, and the formidable craftsmanship of Montegrappa, one of the world’s premier creators of writing instruments.

The project was first conceptualized by Krikor K. Jabourian and Dikran A. Tchablaikan, who worked with Rev. Fr. Dr. Mesrop Topalian and Koko Garabed Sakayan to design the Erebouni pen project.

The design and thematic concepts of the pen evolved over many meetings, deep discussions, and numerous iterations. Dozens of prototypes were built and couriered across the globe as the design was gradually perfected and deeper themes explored.

The concept of Erebouni as a spiritual, intellectual and cultural commemoration evolved.

It was a creative vision of memory and hope, a vision of the future that included the history and the roots of our great nation. 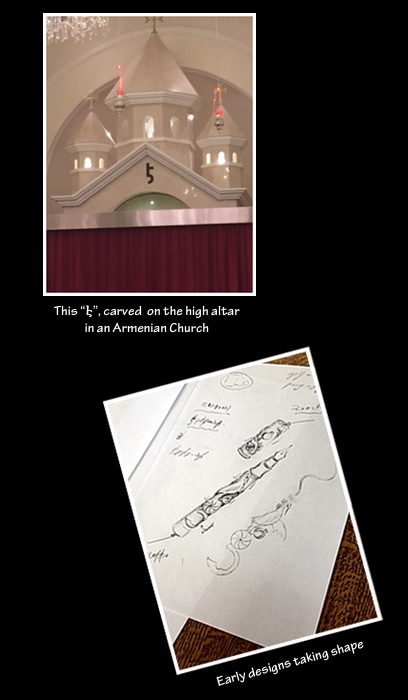 Rooted in the past, yet flowering in the future, time, the cosmic evolution, flows inside the perpetuity of “Է” (“E”). This is the mystery of “EREBOUNI”.

The challenge was to incorporate potent national and theological themes into a limited space; the creative limits were ultimately liberating; we touched upon the key areas most important to the theme beginning with “EREBOUNI” (“Էրեբունի”, as written in Armenian). The word with the capital letter “Է”, which is the seventh in the Armenian alphabet. The capitalized “Է” is not a mere letter for the Armenians, it is first and foremost the proper name of the Lord of Time and Eternity, God (Ex 3, 14).

The past, the present, and the future, in one word – time, the cosmic evolution – always flows inside the perpetuity of “Է” (“E”). This “Է”, the past and the future, the present of temporality and eternity, to whom the eminent Armenian poet Taniel Varoujan, martyred in 1915, called up, saying: “Thou art everything. Thou art Life. Thou art Eternal Love. Let me bow before Thee with profound piety.”

This “Է”, carved in gold on every high altar in every Armenian Church, informs the beadle of the presence of Divine Eternity in human temporality.

The Pen is born

The major figure on the pen is the three vaulted church “Zevartnots”, the seventh century masterpiece of Armenian architecture, symbolizing the Armenian faith in the Holy Trinity: Father, Son, and Holy Spirit.

The “Eternal Flame” is the eternal fire lit in memory of the 1915 victims to venerate the Martyrs of April 24, established in the “Dzidzernagapert” memorial center, Yerevan, on 29 November 1967.

The “Pomegranate” is the symbol of life in the Armenian culture.

“EREBOUNI” is the name of this initiative, which also personifies Armenia.

The Armenian “Church” is the temple of our souls.

The “Wheel of Eternity”, with eight blossoming spokes, is the Armenian symbol of eternity.

“Mount Ararat” is the portrait of the Armenian People and Land, and the symbol of their survival.

The “Է” constitutes the closed pen-body.

A partnership of passion

We hope you treasure this product as much as we treasured creating it.